"I must draw or paint daily everything I see and feel in the magnificent color gamut on the canvas. Otherwise, life loses its sense…" 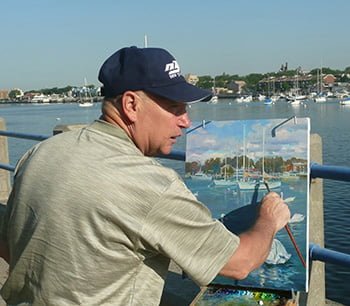 Alexander Masyk has passed away in 2021.

The Masyk’s family tree is from the times of the Ukrainian Cossacks, a captain of the Baturyn battalion, Danylo Masyk. The father of Alexander Masyk was one of the thirteen children in the family, Honored Artist of Ukraine, Vladimir Masyk.

From childhood, Alexander was surrounded by an artistic atmosphere. His father took him for sketches, opened to him the nuts and bolts of painting still life and landscape. Naturally, Alexander enrolled at and successfully graduated from the Taras Shevchenko Republican Art School and the National Ukrainian Academy of Arts.

The fact that he was maternally related to Piotr Repin, a brother of the famous Russian artist Ilia Repin, he learned when he was an adult person.

Alexander Masyk has been taking part in art exhibitions since 1970. He has participated in more than 100 thematic exhibits both in Ukraine and abroad. The geography of his exhibition activities is rather wide – Bulgaria, Greece, Israel, USA, Poland, China. His works are on display in well-known galleries in Colorado Springs, Los Angeles, Arizona. As a public man A. Masyk has always created circles of adherents of visual arts; organized round-table discussions, press conferences, meetings with creative youth, master classes. All this contributed to the popularization of Ukrainian art abroad. It was particularly important when Ukraine became an independent state. All of his solo shows were crowded and aroused a keen interest in Ukrainian art.

Like his father, Alexander mastered all kinds and genres of painting, graphic art, placard, ex-libris. His creative palette became professional, the manner of painting acquired originality, lightness, and transparency.

Paintings by A. Masyk satisfy the capricious tastes of the metropolitan elite. Let it be a portrait, a landscape, or a still life – each canvas has a zest of its own. However, a characteristic feature of his works was space, which makes his compositions special.

His landscapes invite you to Western Ukraine with the sound of Hutsulian trembita, or to historical places of interest in Kyiv, where every street, cathedral, or square is filled with a special state of uniqueness and solemnity. Masyk’s historical paintings are noted for their deep content and the artist’s attitude to artistic images. The portraits representing colorful Ukrainians bear the features of dialogue, which reveals the artist’s original philosophy, and his respect for man the laborer.

Alexander Masyk has always been in the whirlpool of public events in Ukraine. In the course of his creative life portraits of toilers became a separate theme in his work. These are recognizable persons with concrete biographies, fates, and the passionate desire to carry well for people.

Alexander was a frequent guest in Konotop where remained his relatives and his memories of childhood, the happy years of his father’s attention when he experienced the awakening of the creative inspiration for the first time and decided to be an artist. His dream came true.

Alexander Masyk was a member of the National Artists’ Union of Ukraine. He has numerous awards, thanks, and decorations. In 2002 he was awarded the jubilee badge Ten Years of Ukrainian Frontier Troops and the decoration For Contributing to Protection of Ukraine’s State Frontier for his work in frontier troops. He is the Emerald Lyre Prize winner, which he was awarded in 2004 for his series of portraits of commanding frontier guards, and the Republican Steel Rose Prize winner for creative trips to metallurgical plants of Ukraine.

In 2006 he was awarded Gratitude for active participation in the life of the public organization Sumy Association in Kyiv.

As history witnesses, not many artists obtain recognition during their lives. Many artists are known to the narrow circle of their adherents and to inhabitants of the locality where the artist resides.

Alexander Masyk has become a fashionable artist, and to place an order with him is not an easy thing. There are no themes, which would be difficult for him to execute. A. Masyk’s creative arsenal contains historical canvases, Hutsulian motifs, refined still lifes, portraits, Kyiv landscapes.

Alexander was keen on kayaks, so he annually conquers the water expanses of Ukraine. According to him, in extreme situations, one experiences the most acute emotional states, which in turn, nourish creative imagination.

Alexander Masyk has formed as a typical representative of Ukrainian realistic school, and he continues the academic principles of painting. However, he had his own approach to the embodiment of creative ideas into artistic images. Life was seething on his canvases, bringing inimitable beauty to the people.